What wondrous news I have to share with you. The evening I have spent just two glorious nights ago will be one that many will speak of with great joy. I was among those who were summoned to Belle Grove Plantation for the honor of celebrating President James Madison’s birthday. And to be at the spot of where he was born just 63 short years ago, it just touches one’s heart. What a great privilege it was to walk among such delightful people and to be so close to such a rousing couple. Do allow me to tell you of all the happenings of this most amazing occasion.

As you know, I attending just six months ago a most happy occasion at Belle Grove Plantation during President and Mrs. Madison’s anniversary dinner. We arrived when the leaves were just starting to color with their autumn fashion. This event gave us no such beauty. While spring is just yet around the corner, winter seems to be lingering past its welcome. Buds have appeared, but from what I have seen and heard, a fresh blanket of snow has settled on the plantation. But alas, this cool night did not dampen the spirits of those who attended. 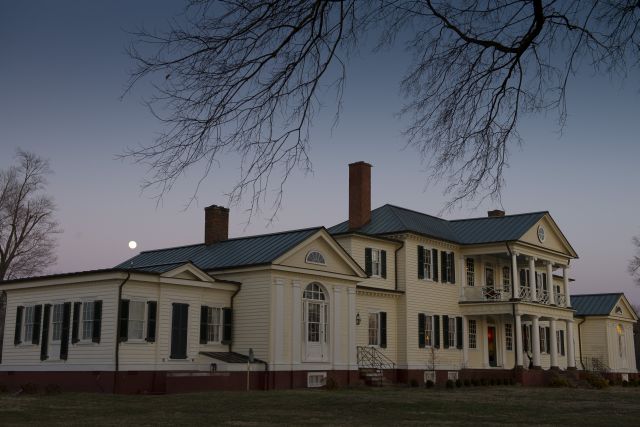 Arriving at this grand mansion still takes breath from my chest as we arrive under the Red Cedar Lane. Just in the distance you can make out the grand mansion with it curved porches and portico calling out and welcoming all that come. Upon entering, my mind was rekindled by my past visit. How grand the hall with its bright “china blue” color. On my last visit, I was informed by one of the servants that this color was a very special color. It was obtained from General Washington at Mount Vernon!

We were ushered into the Parlor to await the dinner. Sister, how much this home has changed! The mansion as taken on such wonders with new curtains and furnishings that must have been shipped from places far away! When invited to sit on the gold settee, my heart leaped with joy. 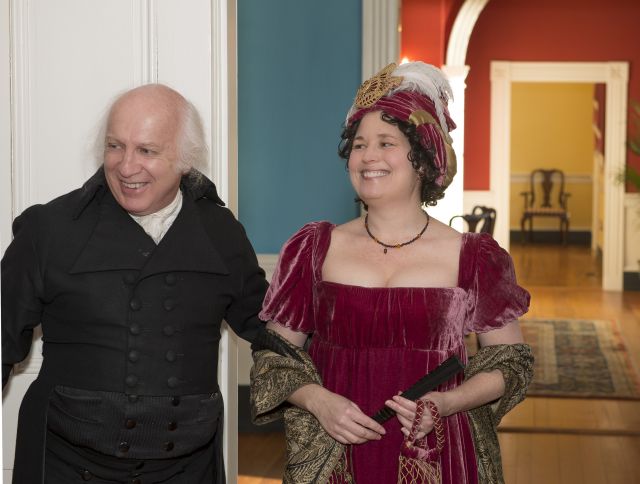 Then came the moment I have long been waiting for. The entry of President and Mrs. Madison. Oh Sister, I wish you could have behold the presents of Dolley Madison. What a striking individual she is! Always graceful and keen to whatever subject President Madison is speaking of. President Madison spoke for a short time as the dinner was completed for our consumption. 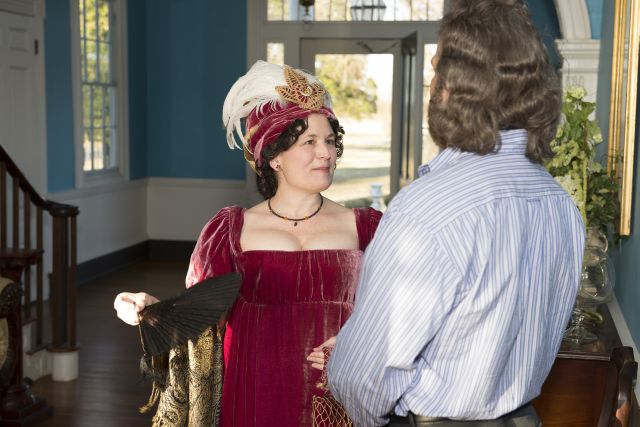 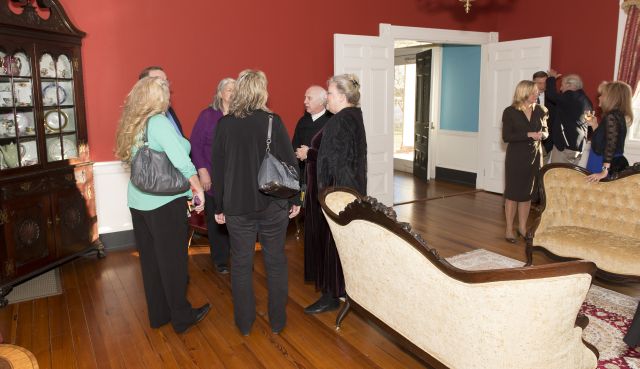 We were shortly ushered into the formal dining room where we beheld such a beautifully appointed table. White linen with gold napkins. One would have thought we were dining with King Louis XVI at the Palace of Versailles. President Madison and Mrs. Madison took their place at the center of the table, so better to speak with all that attended. The conversation was lively and centered on questions many of the guests had for the President. 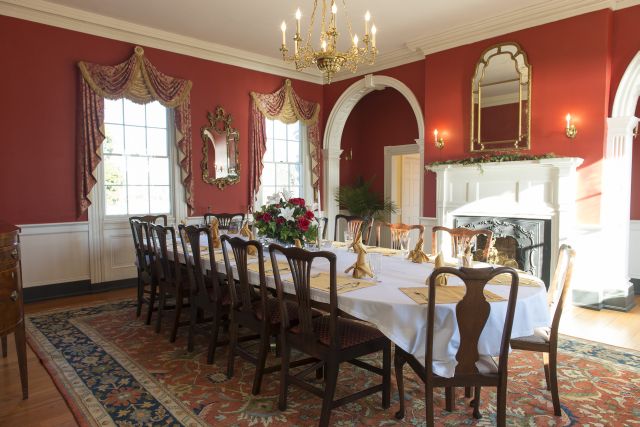 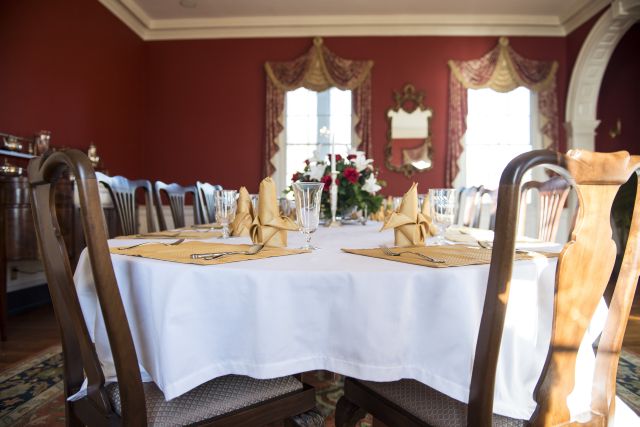 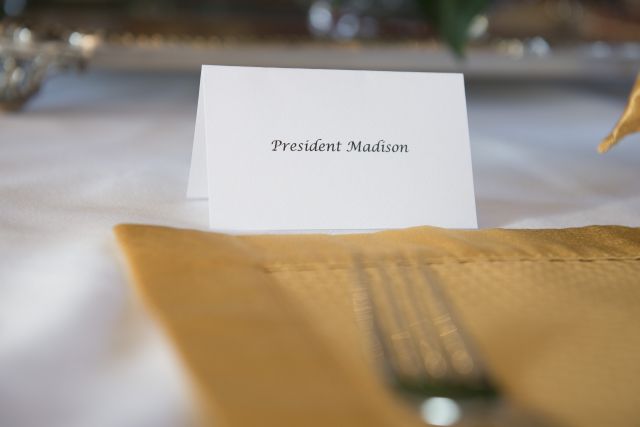 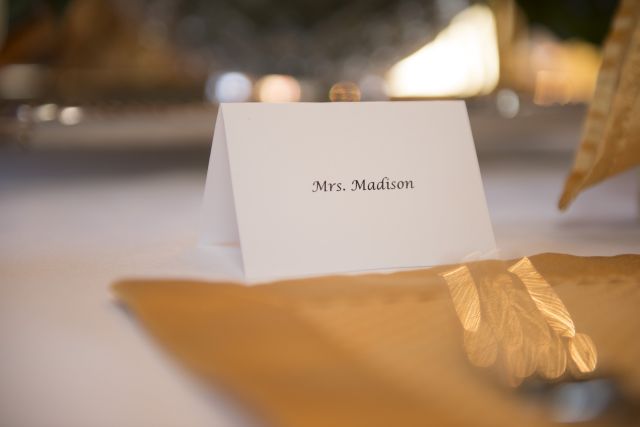 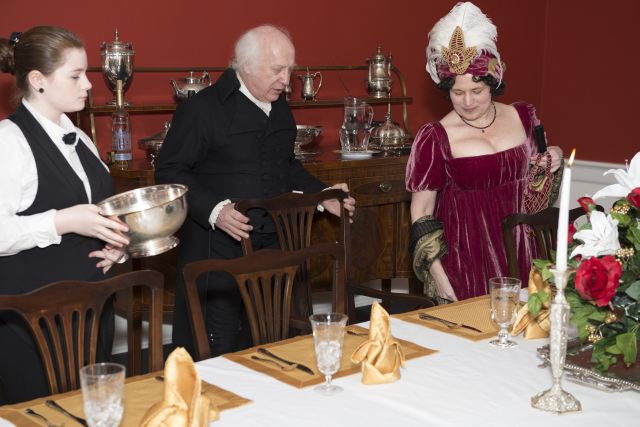 The meal served was one that I will not long forget. Our first course was Shitake Mushroom and Fava Bean Ragout with Roasted Cipollini Onion and Romesco. The mushrooms had a wonderful nutty flavor with a hint of white wine. Combine this with the sweetness of the Cipollini Onion and the tomato base Romesco, it was an dance of flavors in one’s mouth that hit all the right notes. 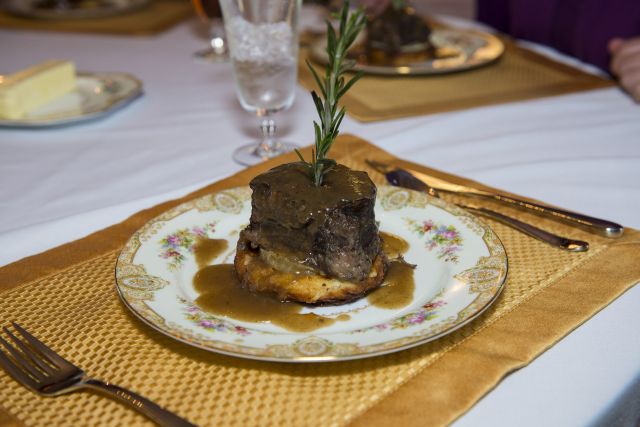 Our main course was something to behold! Braised Short Ribs placed a top a sweet roasted onion with a potato pancake melted in your mouth. The gravy that covered it only added to this tender delight. The potato pancake had this wonderful crisp exterior with the creamy mash potato to follow each and every bit. Glazed Maple Carrots, Roasted Red Pepper with Green Beans and an Aged Balsamic Vinegar Roasted Brussel Sprout with Pine Nuts and Bacon Bits only extended the delight of the meal. 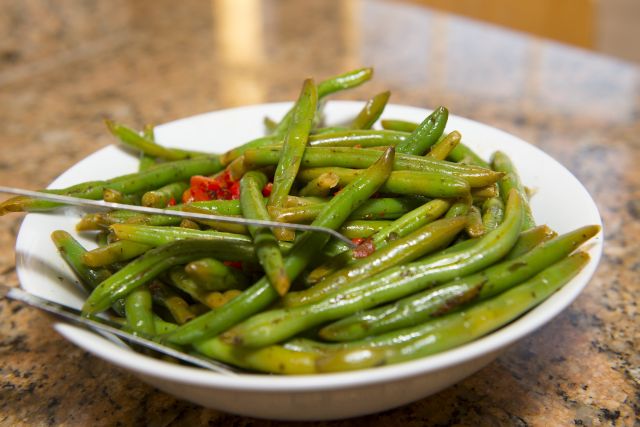 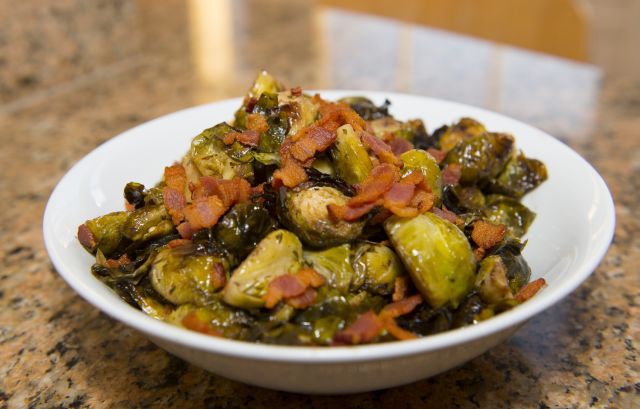 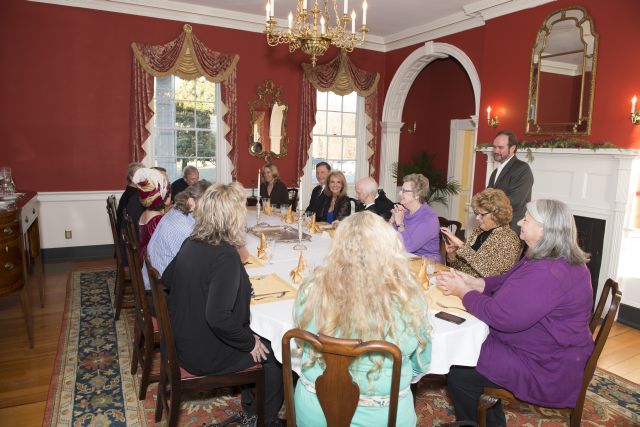 After dinner, we adjourned to the Parlor where we met others who arrived after the meal. Here is where a toast was given by our host to wish President Madison a most joyous birthday. A round of “For He’s a Jolly Good Fellow” followed to which President Madison gave his carolers a smile. President Madison thanked all that attended and let us know that he was please by both our attending and by our love of our country. Mrs. Madison concur and added that her meal this evening had in fact surpassed that of her last visit. I have to say I wholeheartedly have to agree as well. 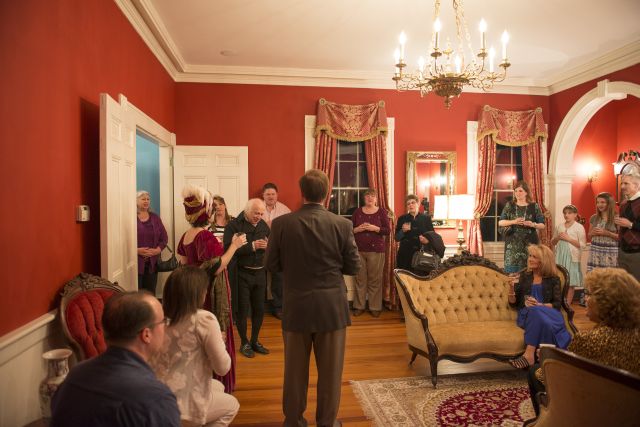 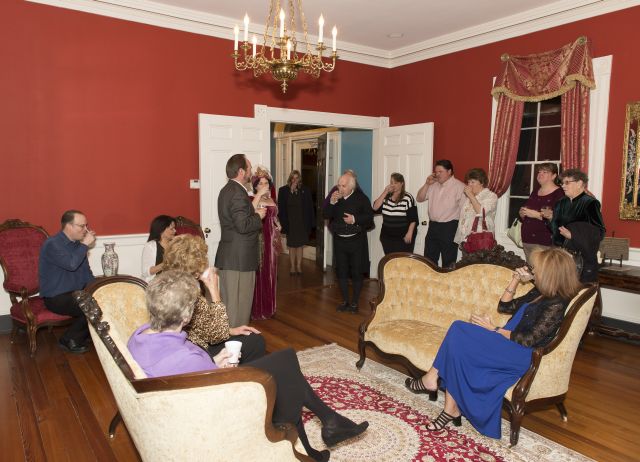 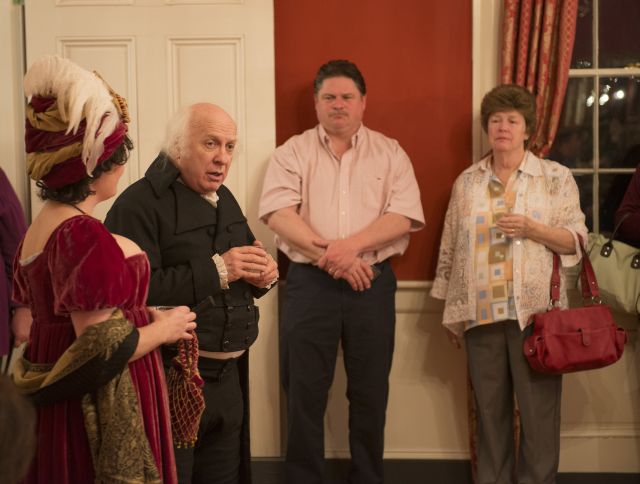 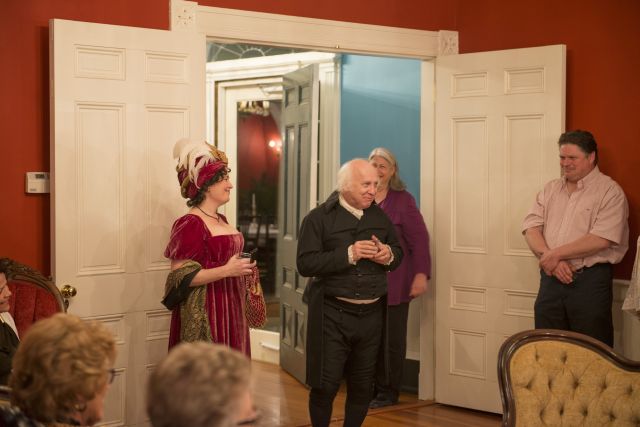 Dessert was presented in the Library with coffee and cool lemonade. The dessert of small apple spice cake with brown sugar icing complimented the meal and delighted the taste buds. For those who couldn’t make room enough for the small cakes, cookies of chocolate chip and coconut were offered to satisfy the sweet tooth. 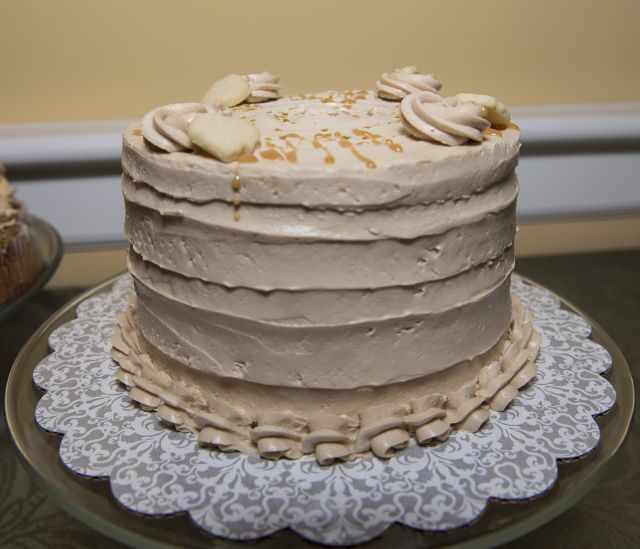 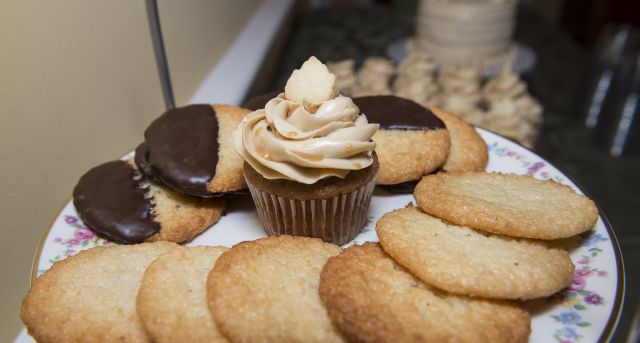 As the night drew to a close, I begged my leave from the President and Mrs. Madison. How I would have long stayed to listen to his words of wisdom. This would only be surpassed by Mrs. Madison’s knowledge of how to get each political party together in one room without killing each other. I do hope some day to attend one of her “Squeezes” in Washington. They must be so exciting. 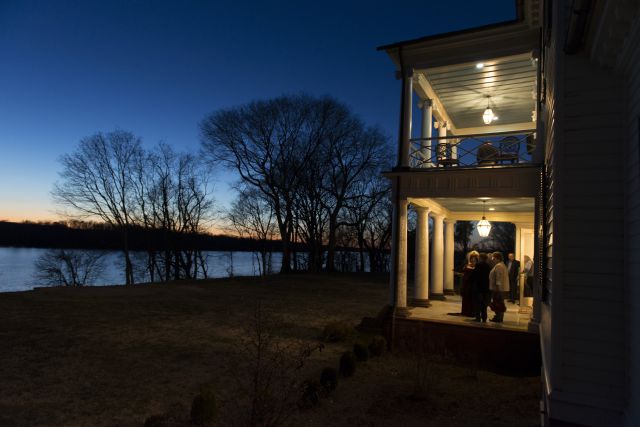 As we drove away, I glanced back at this grand home and hope that soon I would return. The host has given us indications that it will in fact be. I do hope you will be able to attend with us as well the next time. I do long to see your expression as you take in all that I have seen and heard.

Photography provided by Dawn Gardner of

Dessert Provided by Iman of 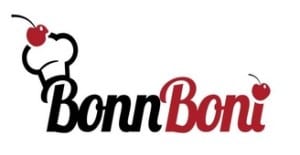