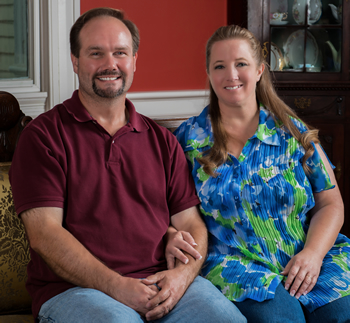 Michelle was born in South Carolina, the oldest of five children. Her grandmother, a very grand Southern woman, instilled in her the passion she has for cooking and entertaining as well as her deep love of history. Michelle’s family moved throughout her childhood which gave her insight into new areas and a diverse mix of friends. After graduating from high school, Michelle enlisted in the United States Marine Corps as a Field Radio Operator. While serving at Camp Lejeune, North Carolina, she met her husband Brett Darnell.

Brett was born in Philadelphia, but grew up in Ohio. Brett was the middle of three sons. Unlike Michelle, Brett grew up in the same community all his life. The community offered a very laid back lifestyle with outdoor activities such as boating and snowmobiling.  After graduating from high school, Brett enlisted in the United States Navy as a Hospital Corpsman.

Shortly after getting married, Michelle left the Marine Corps to follow Brett’s career in the Navy. They moved to Dayton, Ohio in late 1987. In 1988, Brett and Michelle decided to purchase their first home, which was a historic 1885 Federal brick home. Two weeks later, they were blessed with the news that Michelle was pregnant.

In February, 1989, Michelle developed complications and their first child, a daughter, had to be delivered 14 weeks premature. Alexa weighed only one pound, and 3.25 ounces and was 11.5 inches long. She spent 100 days in the hospital and came home weighing just less than 5 pounds. Today, she is a health young adult, who is attending college to complete her degree in psychology. She has no health issues and did not require any surgeries due to her premature birth.

In March, 1991, Brett transferred to Groton, Connecticut to attend Submarine School, leaving Michelle and Alexa in Dayton for one year alone. In June, 1991, they were again blessed with news that Michelle was pregnant. This pregnancy also developed complications and their second child, a son was born in January, 1992, just six weeks early. Tyler weighed 5 pounds and 2 ounces. He was able to come home as normal. Today, he is a healthy young adult. In March, 1992, Brett returned home from Groton before he headed to his next duty station, Norfolk, Virginia. It was the first time, he was able to see his son.

Brett was assigned to the USS Flying Fish, a fast attack submarine, for three years. Michelle and the children moved to the Norfolk area in June, 1992. They settled in Chesapeake, Virginia and have made their home there for the last twenty years. Brett retired from the Navy in 2003. Before retiring from the Navy, Brett completed a Bachelor’s Degree in Health Sciences, and has since earned a Master’s Degree in Public Health Preparedness from Penn State University.

Through the years, Michelle held several different positions to help with the household expenses. She also took five years off, just to be mom during the first five years of their stay in Virginia. Upon returning to work, she worked with a local bistro as a cook and delivery driver. It was during this time that she rediscovered her passion for cooking. It was also during this time, that the owner and executive chef took notice of that passion and helped develop it. She “earned and learned” her way to Sous Chef, before branching out on her own just one year later. Michelle started her first business, catering with a partner, which quickly filled with event dates. Sadly this business would not continue. Michelle’s business partner moved back to Texas with her family and without the support of a partner and having two small children, she had to close it down before it really got started. Fortunately she found a small part time cooking position within her own church that allowed her to cater each week for Wednesday night dinner and pick up some events on the side. With Brett being away on deployment, the children would join her and became her “little helpers”.

As the children started preschool and then elementary school, Michelle moved into a part time office manager position with a local college cafeteria and then a full time position with a bank. She has worked with the bank for ten years.

After Tyler’s graduation from high school in 2010 and then Brett’s graduation in 2011, Michelle found herself ready to put her passion for cooking and history to good use. She knew that she wanted to combine her passions and that the most logical avenue would be a historic Bed and Breakfast.  She knew that it couldn’t be just any home; it needed to have historic importance as well as a good location. So the search began in 2010. In July, 2011, they found their plantation in Belle Grove. Brett and Michelle have worked tirelessly to research its history as well as to develop it into a world class destination.

It is their honor to be able to present this historic plantation to the public for the first time. It is their hope and dream that others will come to see the beauty and historic importance of this grand Southern Plantation.