Sunset on the Plantation

This afternoon, someone knew I needed a “pick me up” kind of moment.

Last Sunday, while Brett was pulling up bricks on the riverside of the Mansion, I got started on the old fountain. It has been there since the early 1900s and we aren’t able to save it. So we are pulling the bricks and will be using them in the walkway as a way to “repurpose” them.

The bricks were coming up pretty easily because the cement has dried up and started cracking. As I got the first level of bricks off, I started hammering the cement and wire messing down so we can fill the hole and make it a beautiful space for a bride and groom to say “I do”. After about 20 minutes of breaking this cement up, I remembered we had a chisel we had bought just for this task.

Just a few minutes later, I was starting to really go to town on the fountain. Bricks were coming up and the cement and messing were falling away.

One good hit and I was screaming. The hammer had missed the chisel and came down on my left, ring finger. I knew it wasn’t going to be good. Brett rushed over and his former Navy Corpsman came out. We pulled off my work glove and my finger was already dripping blood. As soon as I saw it, I ran to the porch. The whole time I was crying and telling Brett how bad it hurt. He got me up and we ran to the kitchen to get it under cold water. As I ran to the kitchen, I started doing the “Oh my this really hurts” dance. But when I put it under the cold water, I started doing the “OMG!  This really hurts” dance.

Poor Brett! I was crying and telling him that it hurt so bad. Then I started feeling light headed and telling him I was going to pass out. (I didn’t) But Brett was trying to see the finger and hold me all at the same time. I just love him. All he could see was the blood running down my finger and my hand. We could see that I had two really good cuts. So he did whatever great Corpsman does in an emergency.

Since we haven’t really moved all our things up yet, we don’t have allot of supplies at the house. So needing a plastic bag for ice, he dumped out a hot dog bun bag and made me an ice bag. That plus two towels and we were off to Patient First in Fredericksburg.

One hour and one x-ray later, we found out that it wasn’t broken and I had two cuts, one across the top and one down the side. Luckily, Brett got my wedding band off before the swelling started. They couldn’t do stitches so I ended up with a bulky wrap for a finger. The good thing was by the time we left, my finger had gone numb. And it stayed numb for three days.

The second day after, I got a call from Patient First. Guess what! I did break it. Right on the tip. There isn’t much you can do but splint it and let it heal. But that night, the feeling started coming back. I spent most of yesterday with my hand up, trying to stop the throbbing.

Today has been a little better. The bulky wrap is off and I am just in a splint. But this afternoon, I hit it on the steering wheel as I was driving back from Stafford. It was just a little painful, even with the splint on there. But someone must have taken pity on me as I pulled into the driveway. 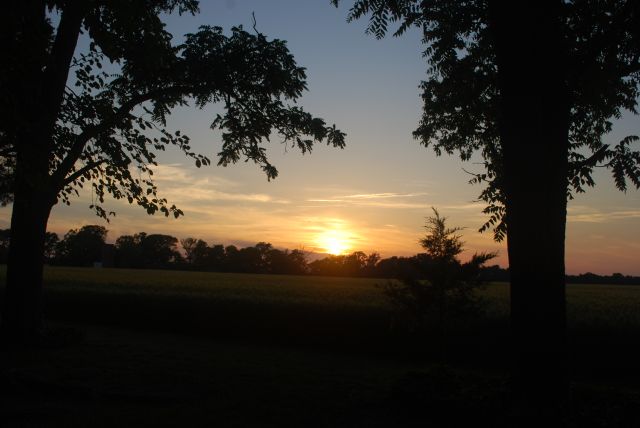 Sunset over the wheat field

As I drove down our long drive, I say one of the most beautiful sights. The sun was setting over the wheat fields and it turned them to a beautiful golden color. I stopped the car and jumped out for a picture. I have started carrying my camera everywhere because you never know when it’s going to happen.

I headed on up to the main gate, hoping I might see some of our wildlife. As I rounded our circle, the only thing I saw was a cat laying in the grass by our wooded area.

But then I saw them! 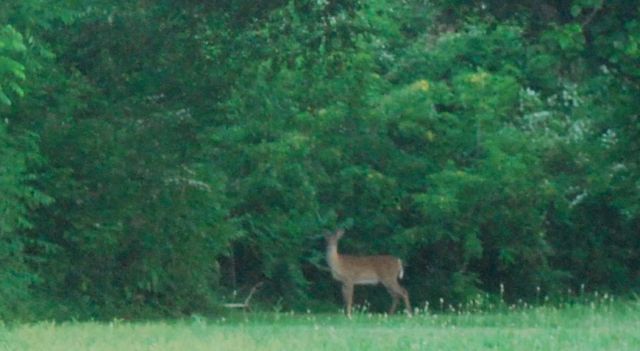 Out from the riverside ran two white tail deer! They had been on the riverside of the Mansion eating. Imgine sitting on the balcony and seeing them come up to eat! It would have been wonderful! I grabbed the camera and got one picture before they disappeared into the woods.

After I got in, I stopped to look back out at the riverside hoping they would come back. Instead I caught two sweet rabbits eating right close to the window. All of a sudden, one started chasing the other. It was so much fun to watch them run and play.

Then I saw it!

Sunset over the River

One of the most beautiful sunsets we have ever had. I grabbed the camera and flew out the door. I got down just to the bluff as the sun slipped down behind the trees. The river was so calm and flat. Almost like glass. And the color. Oh the color was glorious to see. It was as if someone had set up this perfect shot for me to take.

As I came back in, I wasn’t worried about my finger any more. It had stopped throbbing. All I could think about was how beautiful this plantation is and how very lucky we are to be here.

How great to see the wonders of this place and to be able to capture it and share it with you.

31 Comments on “Sunset on the Plantation”