Yesterday, I took off for the day and made my way to Orange, Virginia. If you  have been following the blog, you know that Montpelier and the James Madison Museum are located here. I had read on Facebook that the James Madison Museum was going to have a new exhibition opening on July 7th and in this exhibition was something I would be interested in. 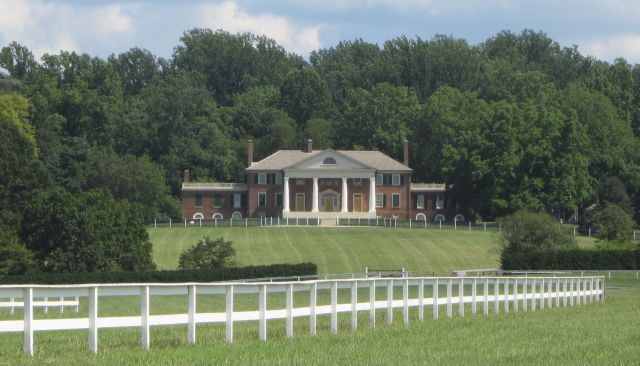 Before I went to the museum, I decided to stop off at Montpelier to meet Matt, the head of the Archeaology Department. I have wanted to meet him for some time now and being in the middle of the week, I knew this might be my only chance. As most of you have read, we have had some really great “finds” lately and I wanted to get his opinion on them. 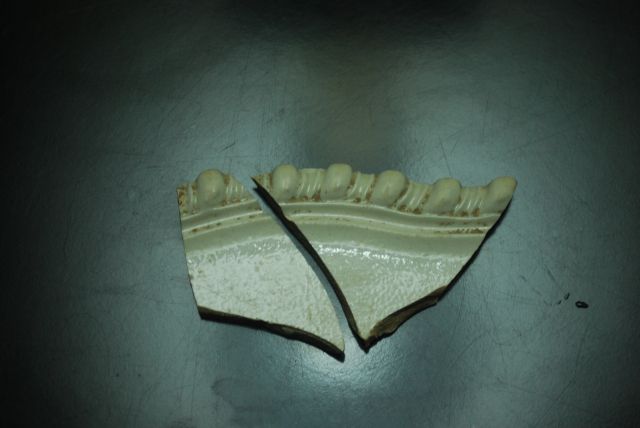 The first piece I showed was our two plate pieces. I had gotten a date from Mara at Ferry Farm that this was from the time period of 1740-1755. Matt confirmed that it was. This really makes me excited because when we first started researching Belle Grove, we were told that the house that James Madison was born in had long ago disappeared into the river. We later heard that the foundation was located between the house and the current bridge. We recently read a letter from the early 1900s that placed it between the current house and the church. But by finding items that date to this time period it shows that there was active life here near the house from that period. It also gives some credibility to the foundations we have under the Small Dining Room and behind the Garage. Maybe one day we can fund a dig there!

He also answered my question on a second piece. It was a very badly rusted piece of metal that I thought might be a knife. Matt says it looks more like a barrel ring. It came from the same hole as the plate. Maybe we have a small trash pit here! We will have to see!

After my talk with Matt, I headed back into Orange and to the James Madison Museum. I couldn’t wait to see what I came to see!

Bethany greeted me at the door with a warm smile and hug. Then she ushered me back to the new display.

Here before me stood three Virginia Sectional Sofas. The first one was the Salubria Sofa from Culpeper, Virginia. It had been in a home built by the Reverend John Thompson in 1757. Robert Grayson purchased it in 1851. His mother, Sara Mason Cooke Grayson was the granddaughter of George Mason of  Gunston Hall. (Funny how places we go and people we learn about here in Virginia seem to connect together) Robert Grayson was with the 6th Virginia Calvary during the Civil War and his brother, John Cooke Grayson was a surgeon in Farmville, Virginia Hospital. Robert Grayson’s son, Admiral Cary T. Grayson would serve as personal physician to President Woodrow Wilson. It is currently owned by the Memorial Foundation of Germanna Colonies in Virginia and was donated to this foundation by the Grayson family in October 2000. It is currently on loan for a short time to the James Madison Museum by the owner and descendant of Admiral Cary T. Grayson. 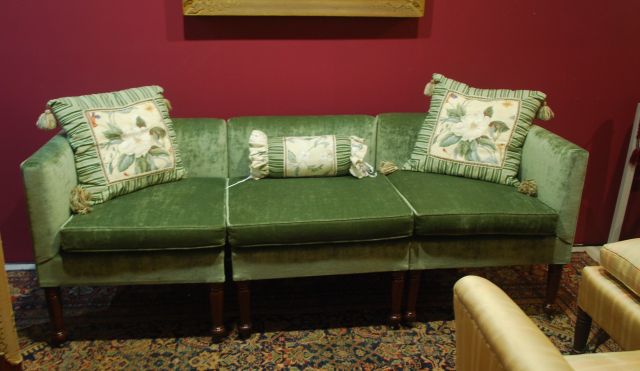 The second sofa to greet me was the Port Royal Sofa. This Sectional Sofa from Virginia was made between 1825 and 1840 and is thought to have begun its life in Warsaw, Virginia (just 30 minutes from Belle Grove Plantation) at the Mount Airy Plantation. It is known that it came to Port Royal (across the river from Belle Grove Plantation) in 1911 when Courtneyay Tayloe Crump married Richard Pratt of Camden Plantation in Port Royal. It has been almost two years since I last spoke of Camden, but I had the opportunity to view it in January 2012. This family is connected to Belle Grove through Elizabeth Pratt Hipkins (mother of Fanny Hipkins Bernard, who the main section of Belle Grove’s Mansion was built for in 1791) and Carolinus Turner, whose family married into the Pratt Family. This sofa spent much of its time at the foot of a bed at Camden. This sofa, unlike the other two in the exhibit, is held together with a simple latch to allow it to be used as a day bed. This sofa remained in the Pratt Family until 2007. Today it is on loan from Laura and Hal Stuart. 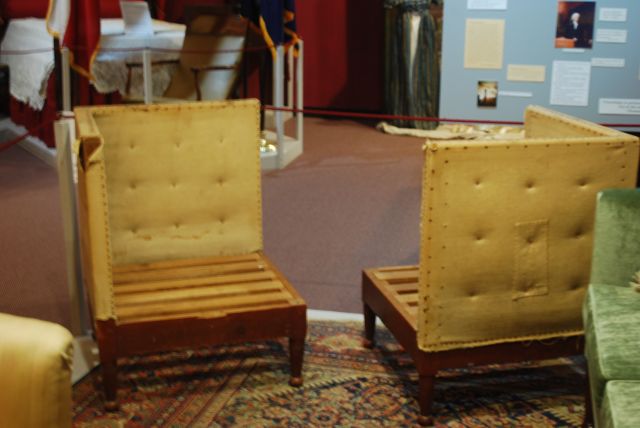 The last sofa was the one I came to see!

The Conway Settee is entirely original and unupholstered. It is believed that it was crafted and/or shipped in/from Falmouth, Virginia. (20 miles north of Belle Grove Plantation). It was shipped to Mrs. Lucy Conway on October 18, 1848. Lucy Hartwell Macon Conway was married to Reuben Conway during James Madison’s second term as President Jefferson’s Secretary of State. Her mother was Sara Madison Catlett and was James Madison’s sister. Reuben Conway was the son of Catlett Conway. Nelly Conway Madison, mother of James Madison was Reuben’s aunt. The settee is made entirely of yellow pine. They used animal blood based paint on the exposed wood to simulate mahogany. The frame is pegged and it has a slatted wood base. The upper upholstery is a heavy Osnaburgh linen. There is no evidence of casters ever being affixed to it. It has a deep seat box and a simple turned leg with original button-down covering tacked to the frame. On each of the sectional you can see Lucy’s name. This settee is a gift from the Orange County Historical Society. 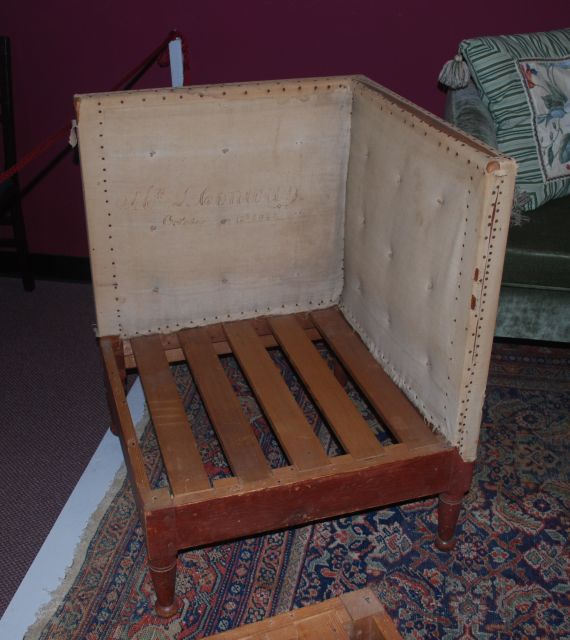 I have to say I was in awe at this piece! How exciting to see a piece of Conway Family History! 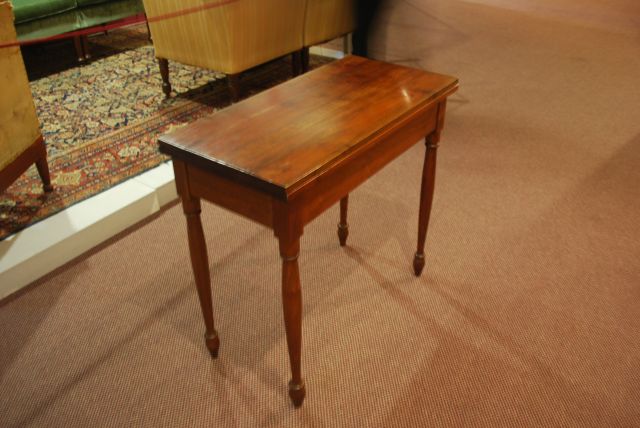 While I was there, I also saw a very wonderful colonial table. I have seen many card tables in our search for tables for Belle Grove, but this one was very unique.

The top of the table rotates around! 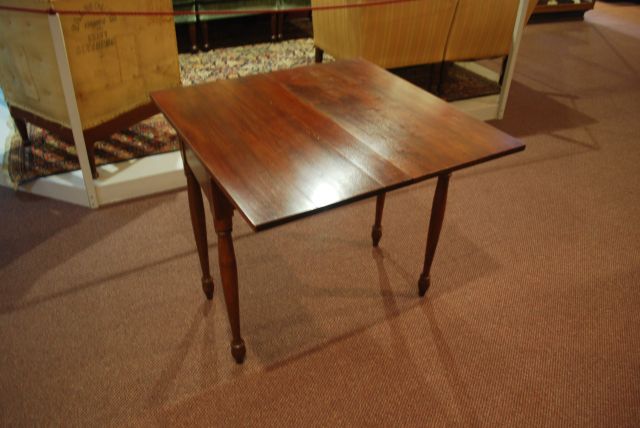 Then opens up and lays on top of the frame!

This table dates to the 17oos and may have been made by slaves. It was on the farm of James B. Daniel , known as “Grandpa Jim”. Mr. Daniel ran the Post Office in the community that was named for him, “Daniel” Virginia. The family used this table for generations until it was donated to the museum. It was a gift from William Downer in 1986.

To see more of Belle Grove and its History