Yesterday was another one those days that so much happened that it was hard to write about it all. But there is one more thing I just have to tell you about.

If you follow the blog and Facebook, you know we have allot of wonderful wildlife. We have deer, groundhogs, osprey, rabbits, eagles and raccoon. Recently, I came across a skunk that seems to like to hang out in our lane at the entry of the plantation. When I first saw it at night, I thought it was a cat. But the white strip down the back quickly told me this was not a “cat” I wanted to get close to.

Yesterday, we got a surprise for our skunk. He decided to head over to the bowling green and visit the grassy field behind the caretaker’s house. Being sunset, I thought I could finally get a good shot of him. So I jumped into my car, windows rolled up mind you, and headed to that side of the driveway.

He had moved off into the tall grass and my camera doesn’t have a good long range lens so it was hard for me to get up close. So, I decided to do a little off roading. Of course with all the rain, I was just praying I didn’t get stuck in the mud. Can’t you image me telling the toll truck driver, “Yeah, I got stuck because I wanted a close up picture of a skunk.”  Boy would this small community have a laugh about that one! Thankfully I didn’t get stuck.

What I got was a really funny story!

I got up to the edge of the grass and I could see him walking towards the caretaker’s house. He was down low in the tall grass, so all I could get was this black thing moving through the grass. I kept thinking to myself, “Just look up!”

Then I got an idea…. I will tap on the roof to get his attention. Yes, I had the window rolled down to get a better shot.

So I reached up and tapped on the roof….

Have you ever seen a cat when you startle it?

It jumps up really high in the air.

That is what this skunk did! 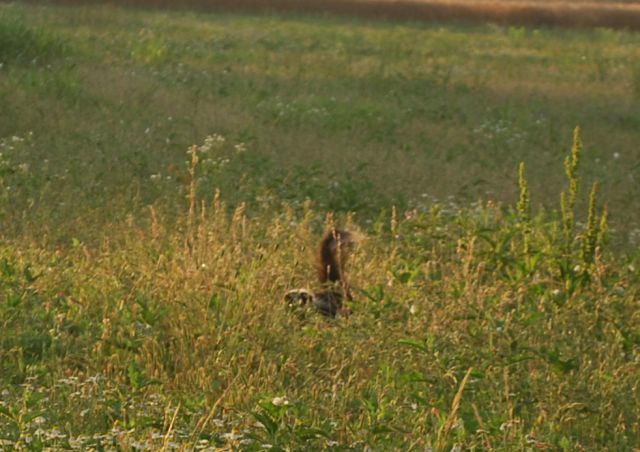 He jumped up, turned to face me and had his tail sticking straight up in the air!

It was so funny! 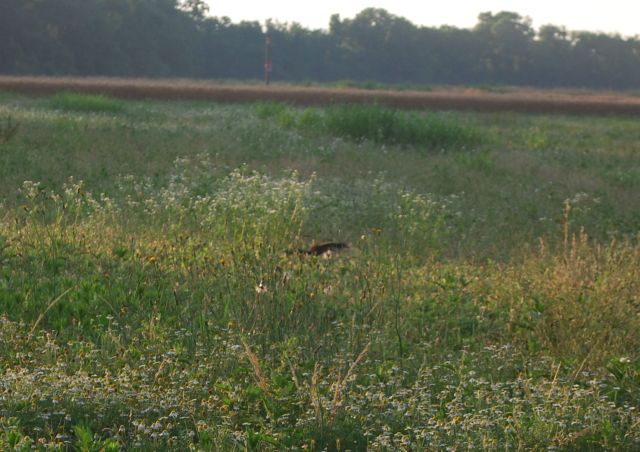 After a few seconds, it continued on its way.

I tapped the roof again.

It jumped, turned and had it tail up again!

I did this about five times, each time, it would jump up, turn and had its tail sticking straight up in the air!

I only got two good shots of him doing this because after the second time, I was laughing too hard!

I pulled away from the grassy area and the skunk made his way on through the grass. I am sure I will get another chance to see him. My friend who was visiting me later saw TWO skunks near the bowling green. Who knows. Maybe one day we will have baby skunks too! But now I have to think of a name for the two. One thing is for sure, it won’t be Pepe or Flower.

Anyone want to make some suggestions?