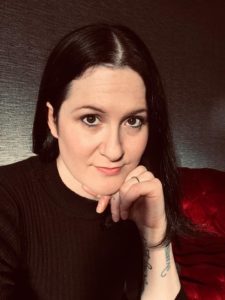 MJ Dickson is the Founder of Sage Paranormal and Sage Paracon, based in Warwickshire, UK. Her experiences with the paranormal began at a young age and she soon realized that she had inherited her mothers’ psychic abilities. Paired with her military father’s penchant for logic, MJ found that this unusual combination of psychic and cynic lent itself perfectly to becoming a successful paranormal investigator.

Since forming Sage Paranormal in 2011, MJ has investigated numerous locations worldwide. With over 12 years of experience in the paranormal field, due to her professionalism, and the level of evidence she was able to document, MJ is recognized as one of the UK’s most well-known and well-respected paranormal researchers. A popular Paracon lecturer, Dickson has earned the reputation as one of the up and coming female investigators within the field.

In 2016 MJ launched the Sage Paracon, the most exclusive paranormal convention within the UK. The Sage Paracon is known for its popular lecturers, legendary VIP party, stalls and more but above all it is MJ herself who makes it a weekend to remember. Her personal touch and friendliness make you feel like a part of the family instantly – A family known as the Sage Tribe.

In 2018 MJ worked alongside Groff Entertainment as the Production Location Consultant for season 4 of the popular television series ‘Paranormal Lockdown’.

MJ will be appearing in the new paranormal television series ‘Paranormal Caught On Camera’, produced by Woodcut Media, the show is set to air in the UK in May 2019 on Sky TVs channel – Pick TV.