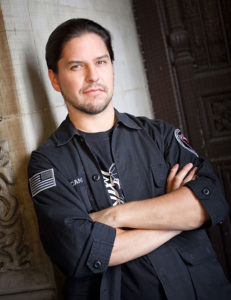 On Haunted Collector, Brian was the Tech Specialist, responsible for the implementation and use of all the gadgets and gear. Best known for mixing old and new techniques of investigating, he often finds himself doing the physical tasks, such as crawling under houses and up into attics. Ultimately, his goal as an investigator is to measure, quantify and get empirical evidence to support the claims of paranormal activity reported while maintaining his skeptical edge.

Within SCARED! his role is that of a parapsychologist; the Scientist. His belief is that the universe, in all its diversity and complexity, is a system that operates within a set of laws and rules, even if we don’t understand them yet. This mindset allows him to accept the unknown more readily and attempt to bridge the gap between Science and Faith.

He first recognized his desire to explore the unknown at a young age. Growing up in Staten Island, New York, Brian often took note of abandoned buildings recessed within the woods near his home during Sunday drives with his parents. Since then, he’s been looking into the darkness and exploring the dangers that come with the decay of civilization’s footprint. Expanding his experiences in urban exploration to include paranormal investigation, there are few places he will not go.

His journey into the paranormal has taken him many places, both physically and conceptually. It is a little-known fact that when SCARED! was formed in 2002, Brian titled himself The Skeptic, a position he can no longer embrace. As he often says, “It’s not the phenomena I am skeptical about, it’s those who report it”.

In addition to Haunted Collector and SCARED!, Brian can be found touring the country appearing at paranormal events as well as lecturing on the college circuit during the Fall. Currently, he can be seen on “Paranormal Caught on Camera” as well as a guest appearance on “The Curse of Oak island”.