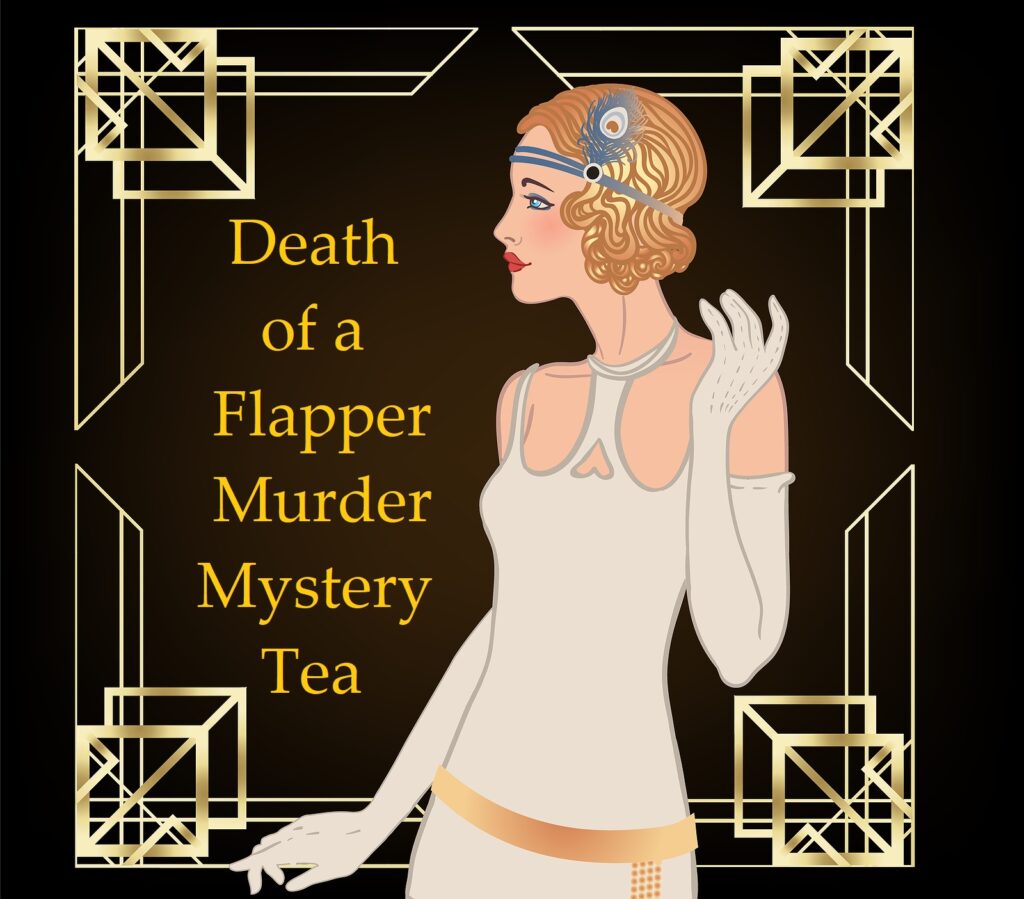 The Roaring 20’s are in full swing, giving birth to the rise of jazz music, flappers and, with the end of the war, a renewed feeling of hope and joviality. It’s the era of prohibition, and organized crime is at an all-time high.

The Half Moon Club is one of just two Speakeasys in town, fighting prohibition by serving alcohol illegally and offering patrons the type of fun that can’t be had when the sun is up. Despite the constant threat of a raid, business at The Half Moon Club is lucrative, as men and women stream through the doors each night.

When a flapper is found shot to death outside the club, the management and loyal patrons of The Half Moon Club scramble to identify the killer before the police catch wind of the killing and shut down the juice joint for good!

Are you a real character? Be a character for our Murder Mystery!
Characters available are:
Hazel Turner

Sassy, saucy and full of spunk, Hazel gives any man a run for their money. The typical flapper, Hazel enjoys smoking from a long cigarette holder, dancing the Charleston and drinking to excess. She loves her jazz loud, her whiskey strong and is often one of the last people to leave The Half Moon Club at the end of the evening.

June is older than the other girls who hang out at The Half Moon Club. She is distinguished and elegant, and is considered a bit of a “high-hat” or a snob. She loves to dance, and is always on the look out for a man to partner her on the dance floor.

Ruby is a woman who just can’t say no… she loves to party and thrives on the attention of men. She claims she has recently left her high society family to live it up as a flapper, much to the chagrin of her father. She has vocal training and her family planned for her to become a professional opera singer, but now she puts all that at risk as she parties and drinks her nights away. She’s new to town, is quite secretive and is usually accompanied to The Half Moon Club by at least one “wet blanket”, or “chaperon”.

Marian Coleman owns The Half Moon Club, and extends her welcome to all types of patrons from all walks of life – providing they can pay for an evening of entertainment. While no one has proof, she is suspected of having mafia affiliations through her late husband, and these ties are the reason her clubs remain open while police are cracking down on illegal establishments. There
have also been rumours about the possibility that she caused her husband’s death.

Marjorie is a meddlesome woman who always has her nose in the affairs of others. Many patrons who frequent The Half Moon Club have learned the hard way to keep their mouths shut when Marjorie approaches. She has already made enemies with most of the other flappers at the club, even though she has only been frequenting The Half Moon Club for a few months. Before that she was a regular at The Caterpillar Club, another of the Marian Coleman’s clubs.

While in any other club having a female bartender would be improper, the usual rules no longer apply – not since Marian Coleman took over her late husband’s clubs! She’s not only a fantastic bartender, but can handle any man who comes her way. Arlene is charismatic and loves to chat with the patrons but won’t take any sass. Her magnetic personality makes her privy to all sorts
of the club patrons’ dark secrets – especially after they’ve had a few drinks.

Ticket are fully refundable if cancelled by May 11th. After May 11th tickets are non-refundable.