We are excited to announce that our beloved Mulberry Tree has hit the big time!

If you have been following along, you know that we had to cut down a Mulberry Tree that dates back 200 years. This means that this tree was alive when James Madison was!

But instead of taking the wood and trashing it, we contacted two Woodworkers Guilds to save the wood.

Bob DeMartino of The Historic Pen Company created some of the most beautiful writing pens with the wood we gave him.

Bob contacted me a few days ago to let me know that he has found a new way to bring these priceless pens to the public . . . in a big way!

Our pens are now available in the New York Times Store in New York! You can also purchase them online! 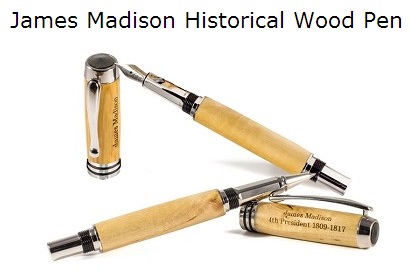 The spectacular James Madison Pen was created with wood from the noted mulberry tree that stood for more than 200 years at the fourth president’s Virginia birthplace.

Madison, often hailed as the “Father of the Constitution,” was born in 1751 in Belle Grove Plantation in Port Conway, Va. The mulberry tree stood as the focal point of the entrance at the plantation before succumbing to disease and infestation. It was taken down in April 2013 to prevent damage to the main house.

This beautiful heirloom pen with authentic “witness wood” was expertly handcrafted and features the highest quality rhodium hardware. Each pen is engraved “James Madison – 4th President 1809-1817” and comes with a Certificate of Authenticity. The pen also comes in a high-quality hardwood and glass display box.

The James Madison Pen is available in both a rollerball and fountain pen (nib has a medium German iridium point). Each pen is unique and grain textures vary.

This is a perfectly weighted “postable” pen –the cap screws onto the pen in an open position. It measures 6” open.

The pen is an outstanding collectible, but it is also made to be used and passed down to future generations.