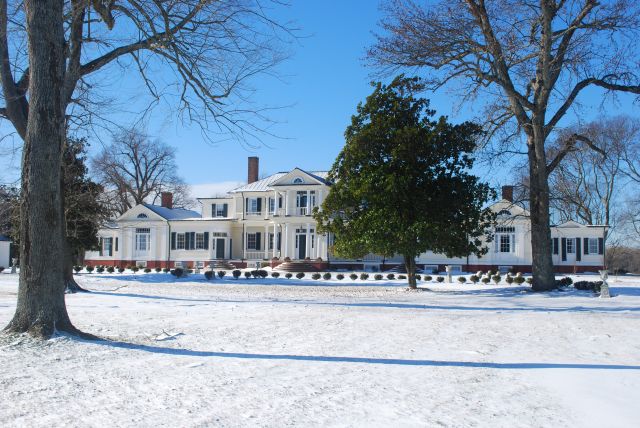 The Arctic Blast arrived at the plantation last night! We started the day before in the 50s giving us a taste of the start of spring. And then Mother Nature said, “No so fast!” It started around 12 noon with a light shower of what looked like ice, but quickly changed to snow at 1pm. By 4pm, the snow showers had tamper off and we were left with what looked like just a mild dusting.

During this whole event, I stayed warm and cozy in my room in the mansion, watching from my window as I worked on upcoming events for the Spring and Summer. Every now and then I would glance out to see if the pile was getting any bigger. News reports had said we would get 4 to 6 inches. But by sunset, it didn’t look like we were going to have more than an inch.

About 10pm, I wondered around the mansion to check on the rooms to make sure the temperatures were holding with the cold setting in. I haven’t told you, but about two weeks ago when we had our first Arctic Blast and we got down to 4 degrees, I awoke to a surprise. I walked out of my room into the Small Dining Room to see it “sprinkling” from the ceiling and wall. I rushed upstairs to find the Turner Suite’s bathroom floor covered in water. The ceiling in the bathroom had several places it was linking from and one spot even looked as if it was going to grow into a bubble of water. I ended up with four pots or trash cans in the bathroom to catch the water from the ceiling. I couldn’t even believe it, but water was even coming in from the top inside window sill!

I had to rush to get the water up to stop the damage to the ceiling in the dining room. I ended up with two pots down there. The whole time, I was making frenetic calls to Brett and the Property Manager to see what I needed to do. I finally got on the phone with the plumber company, who told me to turn off the main water valve. AH! I couldn’t remember where it was! Of course I started in the basement in the mechanical room and found it. Water off and pots catching what was left, I waited for the plumber.

Plumber arrived and isolated the water from the Turner bath so we could have water again. But they weren’t able to fix the issue for one week! Once they returned, we found out that it had been a joint that had busted during the subzero temperatures. The pipe was located in between the ceiling in the bathroom and the roof. According to the plumber, when they installed it, they didn’t place enough insulation around them and so … well you know. Today we have a one foot by one foot hole in the ceiling in the bath. We have to leave it open to allow it to dry. Then we fix it. Thank goodness Brett has experience in hanging dry wall! 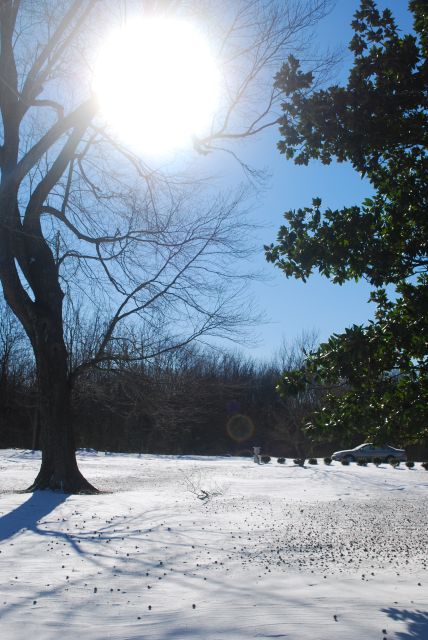 This morning, I woke to a beautiful sight! Snow all over the place! It was also 11 degrees when I got out to take pictures. Double clothes and sunglasses helped, but it was really cold! The one thing I love about our snow are the snow drifts. I could hear the wind howling all night. The wind passes over our chimneys and makes it sound like furniture being moved overhead. But as I walked around, I could see the snow drifts and the designs the wind had made in the snow. 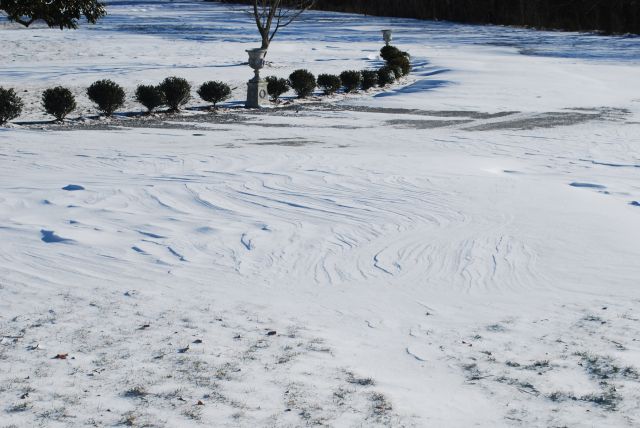 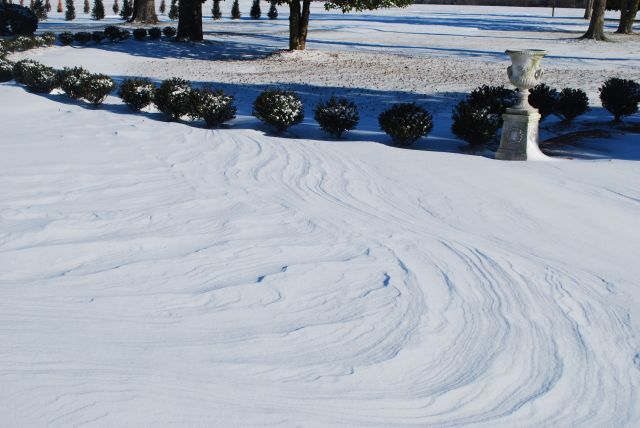 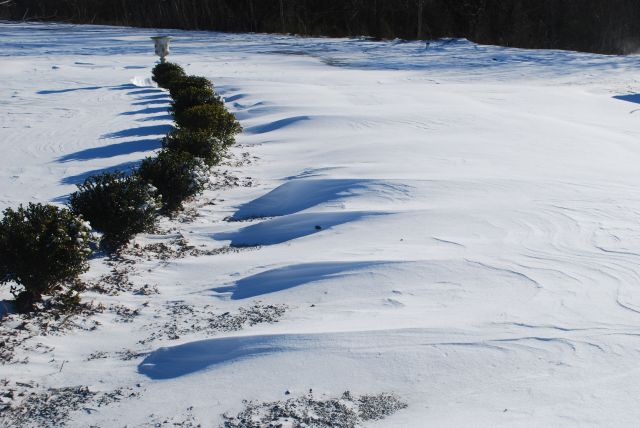 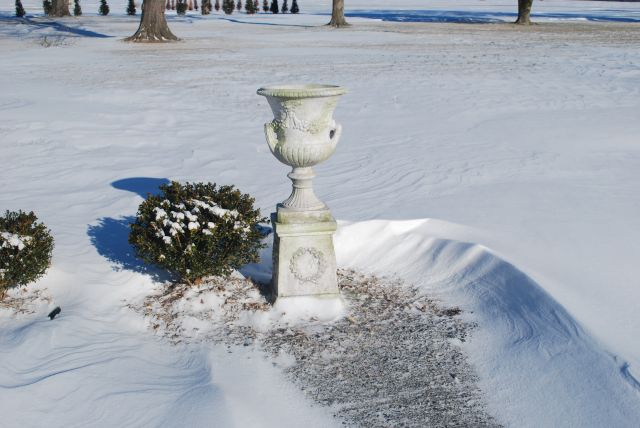 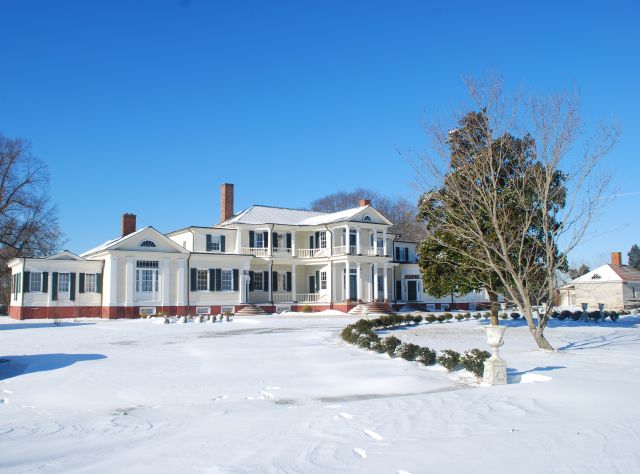 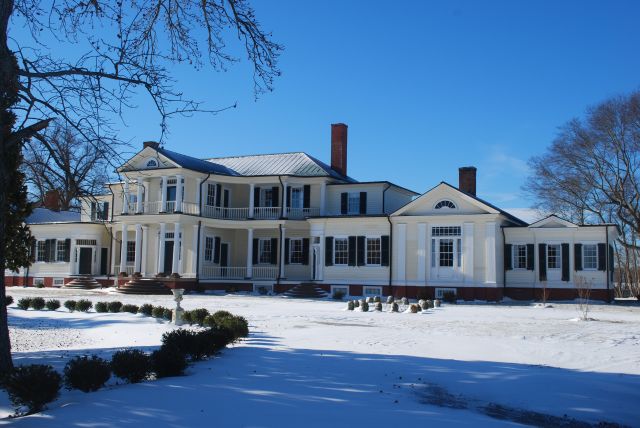 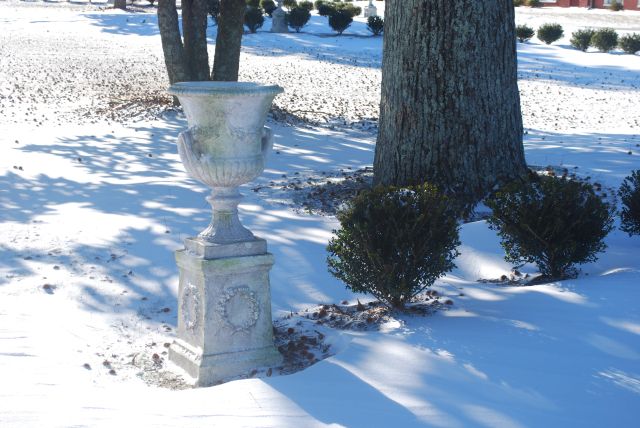 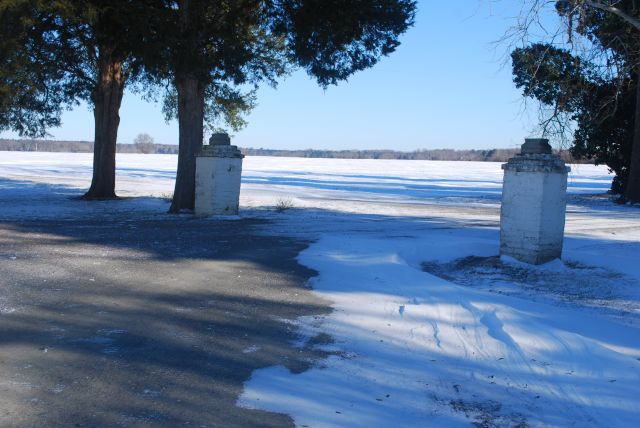 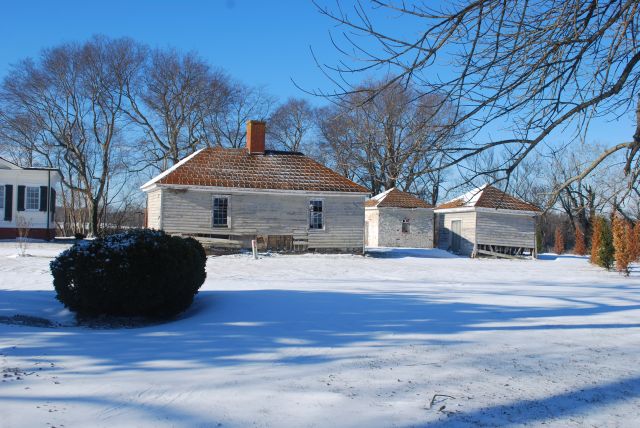 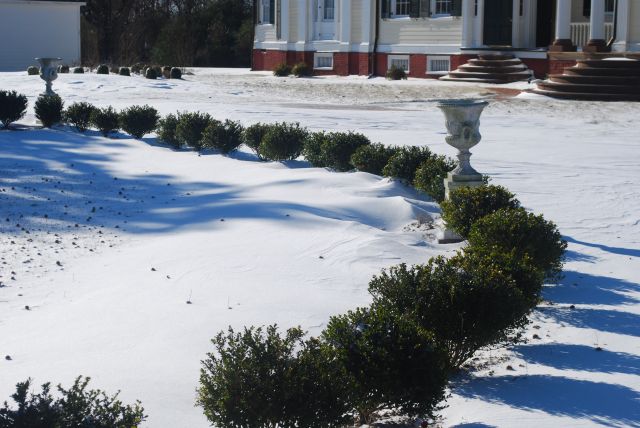 Surprising, the river side of the mansion didn’t have as much snow as the front. I know it was because of all the wind coming off the river, blowing it up against the mansion. As the day went on, you could see our mud flat in the middle of the river was frozen. It is only 3 to 4 feet in the middle. 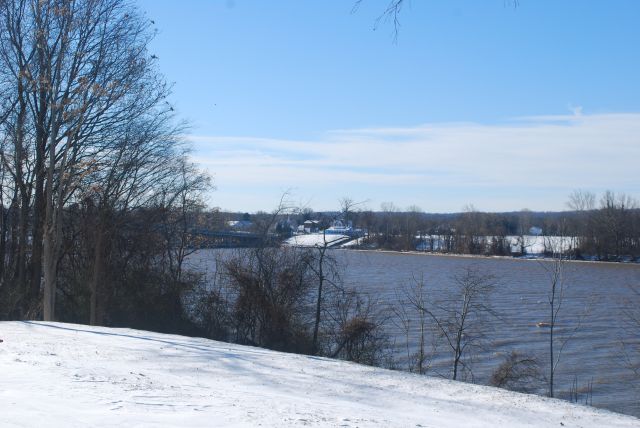 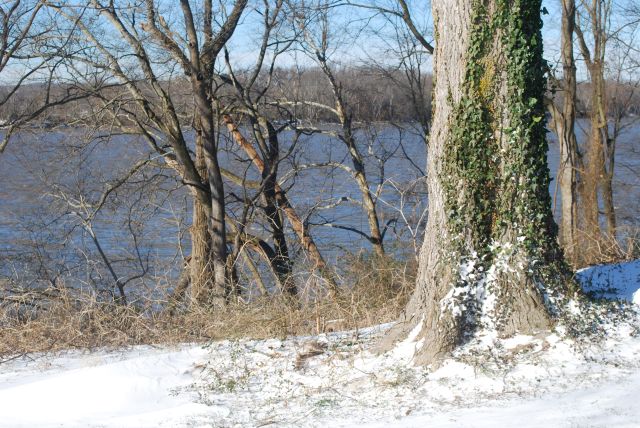 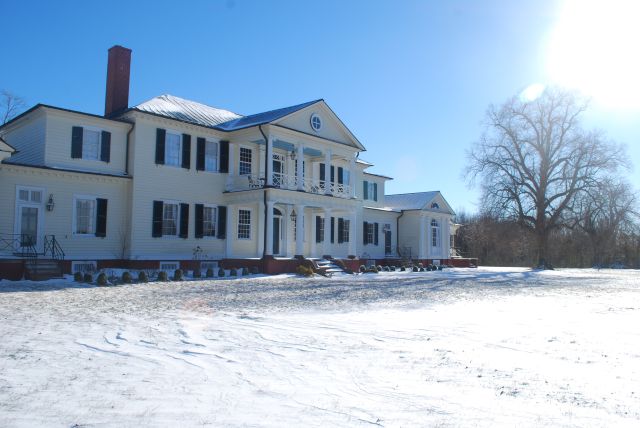 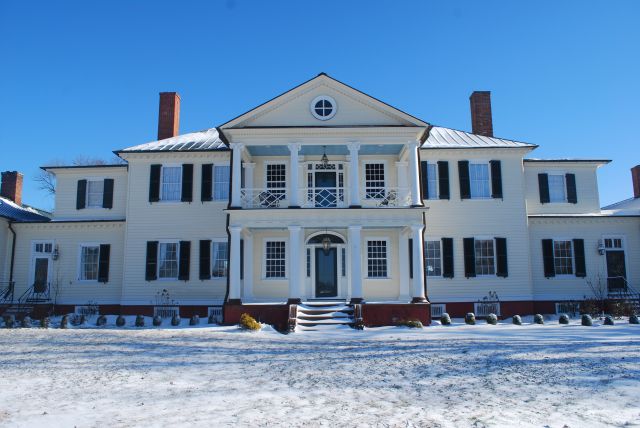 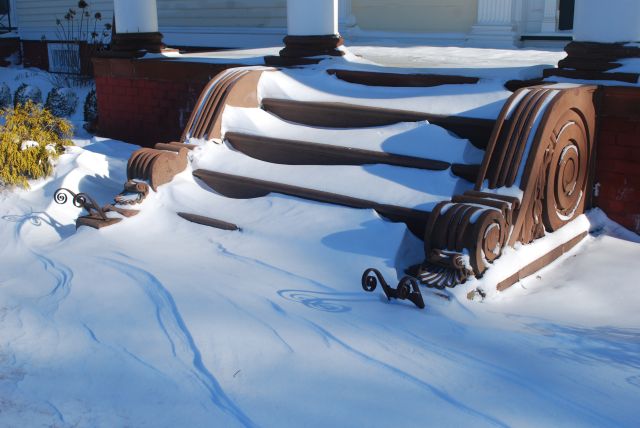 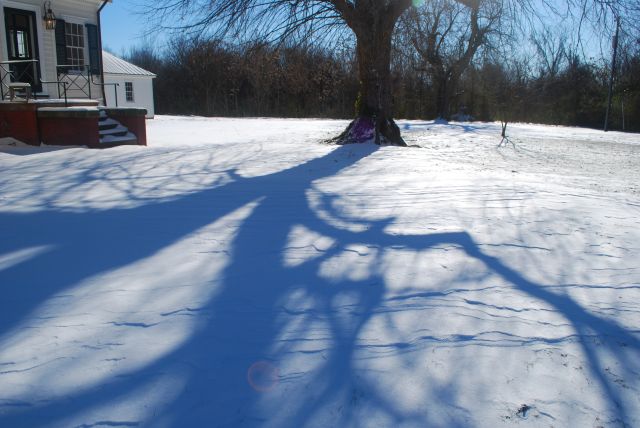 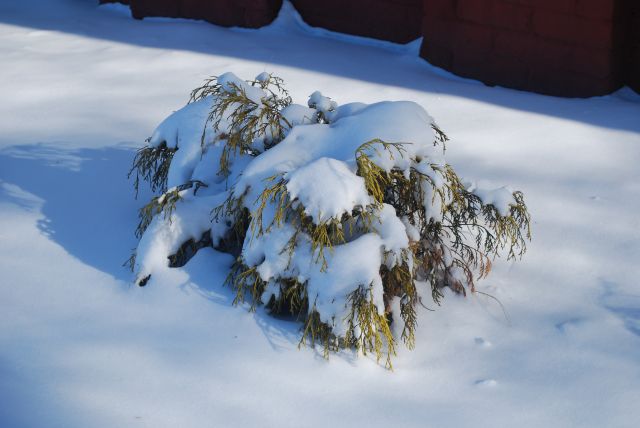 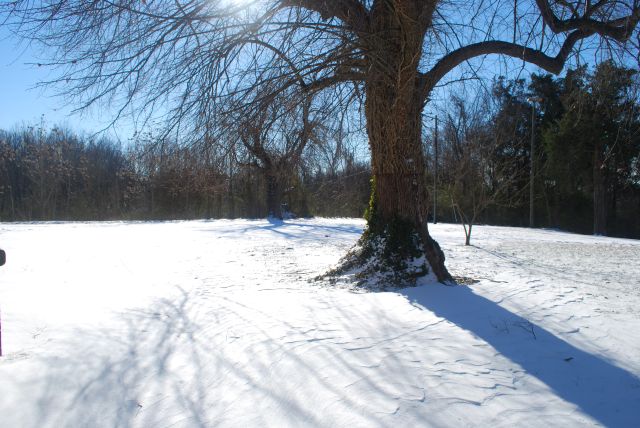 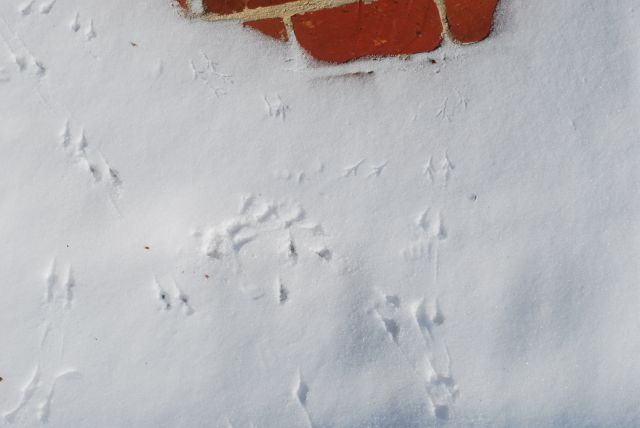 I ended the day watching the sunset over the river. Just as the last glow of the sunset lite up the sky, a flock of Canadian Geese flew over the river and landed in the field on the other bank. It was so magical. I stood there for awhile thinking to myself what it must have been like for former owners. We are lucky today because we have a geothermal system to keep us warm. But think about having to go out and cut wood and keep the home fires burning! Old homes are so drafty and I could just see them huddling together by the fire. I still wonder, are the sights I am seeing like those that were seen by the former owners. What would they have thought when they got up the next morning. 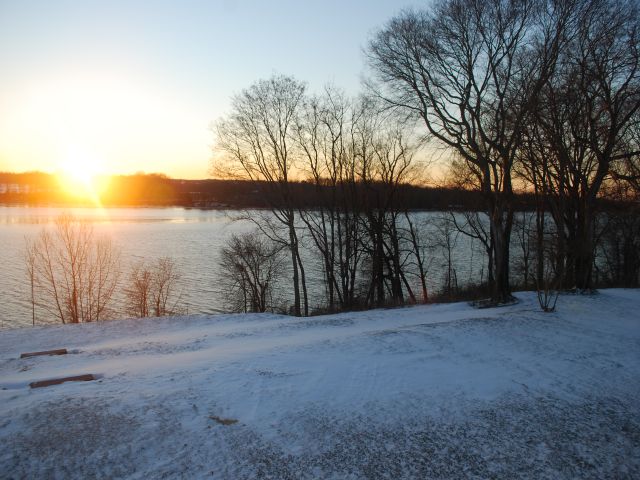 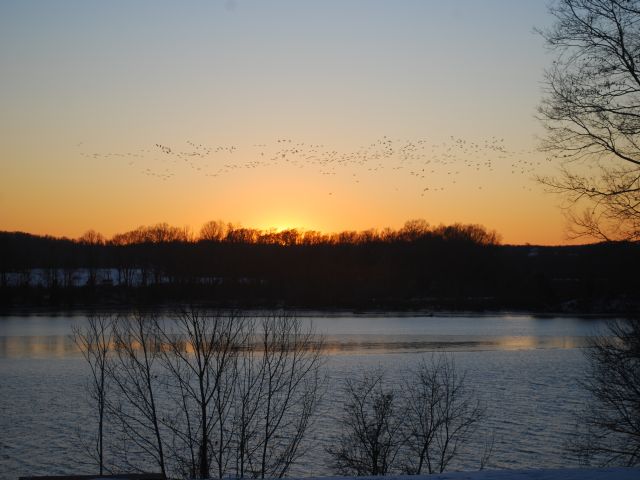 4 Comments on “Snow Bound and Frozen”